Once in a lifetime, you must have thought about doing various degree courses at the same time. Question is that if any student pursues two Degree Courses at same time (simultaneously) and Joint Degree Programme, is it Valid or Not? Experts have different views on this decision. Some say by applying it, students knowledge base will be expanded or improved while others feel that academic standards will get lowered. In January 2016, UGC issued an order that Students not allowed to pursue two regular degrees together. in 2013, UGC had finally given thumbs up for proposal to allow students to take up two degree programmes which was recommended in 2012 by an expert committee that students enrolled in a regular degree course should be allowed to pursue an additional degree simultaneously under open or distance education mode.

All this is the result of a single person’s efforts i.e. Dr. Furqan Qamar. He is Vice Chancellor, Central University of Hyderabad. He is also the head of UGC expert panel that had made these recommendations. This change was required “in view of the changing scenario and flexible guidelines”. To cope with the high completion students need more choices in courses. The Expert panel also recommended that UGC should encourage joint degree programmes. 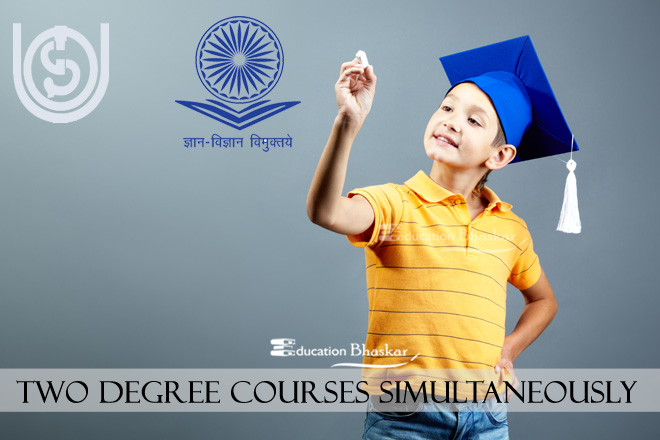 UGC Chairman Prof Ved. Prakash said in one of his official statement that this new rule will allow students to expand their skill set. They can learn new things beyond their comfort zones & this will also teach them to push their limits. All Indian Universities have been asked to change their rules to promote joint degree programmes.

What is the Present Rule of pursuing Two Courses at the same time?

You can take admission in two degrees courses simultaneously after August 2013 It is expected to be fully functional from the academic year of 2014-15. One thing that is not still clear is that which courses are included or exempted when this law was passed. Some universities have even started taking UGC recommendations seriously and granted the permission to few students to get enrolled in two degrees simultaneously.

Let’s talk about the exact rules. So it’s not a crime anymore to pursue two degrees simultaneously in India. But some limitations are still there. Some universities has implemented this rules but with some modifications and limitations such as student can go for distant/open courses along with a regular course or it should be from another university.

The Distance Education Council in its 40th meeting held on 08 June 2012 approved a policy on pursuing two or more programmes simultaneously in various combinations as under. Some combinations are also mentioned by the DEC. These combinations are given as below ( in universities like IGNOU):

In order to promote distance education in India, the Distance Education Council (DEC) students can now be enrolled in the two degree prgrammes simultaneously. According to DEC, students can pursue two degrees through a combination of distance and regular modes, however, two-degree programme pursued through regular modes is not valid.

What RTI says about it?

You can get better Idea about current rules after seeing below given RTI reply from UGC. 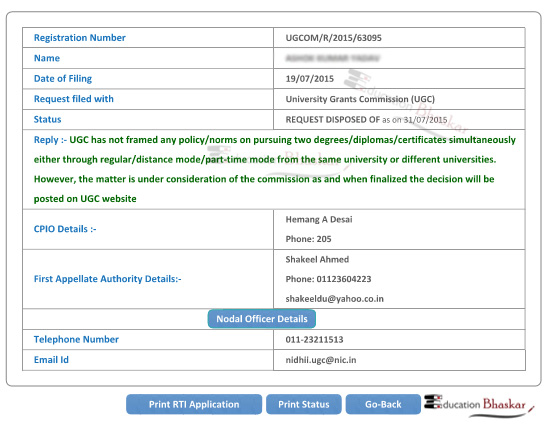 It simply means that the students should not be allowed to undertake two “Regular” degrees at the same time. On January 19, University Grants Commission (UGC) said that its consultations regarding allowing students to pursue two degrees simultaneously have not received a positive response so far.

Hence, we can understand this in simple languages “Two Degree are allowed but not in regular mode. However, One Regular with one Distance mode, Two diplomas, two certificates, one degree one certificate, are allowed”. Some universities have implemented this rules but with some modifications and limitations such as student can go for distant/open courses along with a regular course or it should be from another university. These limitations are on the university level, so we advise you to contact directly to university officials in which you are perusing regular course or along with the one in which you are interested in taking another course. We hope any of the Indian university will not have any problem with this because it’s not illegal anymore. With this, I am glad to tell you that you can show both certificates during government and private sector job interview or in recruitment form.

Disclaimer: The above information is specific to Indian universities only. You must contact your university authority for the exact rule to pursue one regular course and one distance learning course from same university or two different universities simultaneously.