How to Design an API Which is RESTful -API Design Guidance

by Rahul Sethi
in Programming, How to, Technology, Tips & Tricks
Reading Time: 3 mins read
A A
0
84
SHARES
Share on TwitterShare on WhatsAppShare on Facebook

One of the questions we most often get is how to design an API? It is a pretty broad question, and if we were to answer it in its entirety, we’d have to write a book. That said in this article we will look at the basics of designing a RESTful API. We choose the RESTful design because it is the most widely used, comparatively easier and most flexible. It also takes advantage of all or most existing internet protocols, and so developers don’t have to make complicated calls to the libraries or install them in the first place. The only added baggage if you want to look at it that way is the use of hypermedia where the API may need to be structurally altered.

[accordions]
[accordion title=”What is an API?” load=”show”]API expands as Application Programmable/Programming Interface. It is defined as an abstraction layer for software services & resources. The API specifies the rules & the expected behavior so that the service or resource can be accessed as a black box, without a need to understand the details of how it is implemented. The basic example that may be relevant to all the web developer will be the MySQL API for PHP. In MySQL terminology, we call it the PHP MySQL connector. [/accordion]
[/accordions]

Design an API: SOAP or REST – Which is Better?

Now before you can learn how to design an API, it is important to choose between REST and SOAP. While this article focuses on REST, it is essential to know why we have done away with the SOAP architecture. While SOAP does exist today as part of many legacy APIs, it was the most popular back in the late 90s. Since then REST enabled faster, smaller and more flexible APIs. Then there is also the fact that REST isn’t limited to XML in the way SOAP is which means you can use both YAML and JSON to code the API. 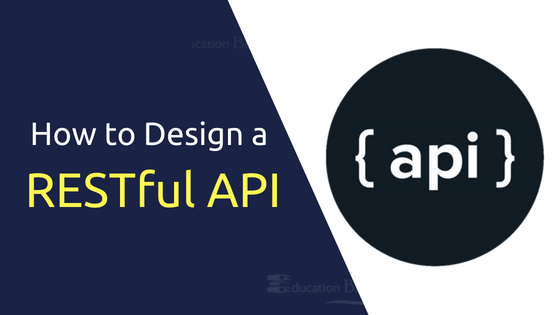 The Shortcoming of RESTful Design

Knowing the weaknesses of the RESTful design will help you circumvent it when designing an API. Some cons may be inconvenient while others may be limiting the scope of an API. For starters, REST APIs are not able to hold state when at REST. Then REST is challenging to learn for someone who is new to the development world. Plus. RESTful APIs may not work the same way across all operating systems or platforms.

One of the somewhat tricky aspects of design an RESTful API is the assumption that both the client and server are very different entities which means that each evolves independently from the other. In some ways, it can be beneficial like when developing a mobile app whereby any change to the application does not automatically make a change to the server side of things. However, on the flip side, it also means extra work on both sides if changes need to be made across both. The separation can be both beneficial as well as painstakingly challenging to work with depending on the API’s concept.

In most cases, RESTful APIs can be stateless which allows them to make independent calls to each other and every other software. The RESTful implementation of the API means that they don’t exclusively rely on a central database or session but rather on a myriad of sources. So, each call can have self-contained data which can be a token, user ID, key, etc. The routine improves reliability because the only requirement is to send a call instead of a series of various calls through the server to create an object, the latter technique can cause failure. Plus, it makes scalability possible while at the same time reducing the memory footprint of an application.

Implementing and Using the Cache

Stateless APIs can have a lot of overhead when handling requests both outbound and inbound, so the API needs to cache data. The cached data is stored for a specific period, while real-time data isn’t cached. Though caching is essential as it helps to reduce load and response times.